LINCS-funded CMap L1000 data has been generated by the Connectivity Map group at the Broad Institute. All the LINCS data is deposited into GEO and available for download. An overview of the data levels and signature generation process is described in a separate article of Connectopedia. The code used for data processing is available at https://github.com/cmap/cmapM. While we provide the data from each level of processing, unless you are interested in pre-processing details, we suggest that you use Level 5 data for your analyses.

*A note about the difference between GEO terms: Series, Super Series, and subset Series: *

A Series record links together a group of related samples and provides a focal point and description of the entire study. Series records may also contain tables describing extracted data, summary conclusions, or analyses. Due to GEO technical limitations, for the CMap L1000 submission to GEO the samples have been broken up into multiple series (subset Series), which are linked together via a master or Super Series (GSE70138). The Super Series GSE70138 contains supplementary data files, one for each level of data; these contain the data and metadata for every sample in the series. The files are in GCTx format. Most importantly, if you simply want the matrices, ignore the sub-series and sub-projects.

The files available for download are either of the GCTx or TXT format and contain data matrices and metadata annotation.

The following table shows the filenames for the metadata and metrics data. The metadata is accurate to the best of our knowledge at the time of deposition. However, given the large size of the data and the many people, organizations, and processes involved, there will inevitably be errors or holes. While we will do our best to fix any errors, accessing via the CLUE API (clue.io/api) is likely a more convenient and up-to-date mode for subscribers.

Note that any missing metadata value is represented by -666, which indicates that the information is not available or not applicable.

Each dataset is described below, accompanied by a table or tables with information about the files.

LINCS Phase 1 data is in GEO series GSE92742. As this represents an earlier phase of LINCS, it will not be updated except for bug fixes, if any. Please note that an earlier version of this release incorrectly contained ~5k profiles that should not have been included, and they have been removed. 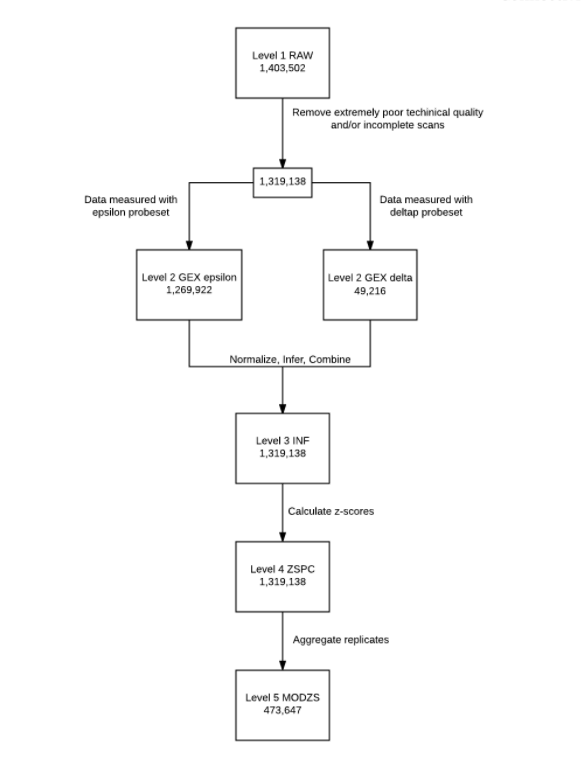 *Overview of the GSE92742 dataset. *This flow chart is a graphical explanation of the numbers of entries in each file at the different levels of data processing. An overview of the data levels and signature generation process is described in a separate article of Connectopedia.

For GSE92742, there is more data at level 1 than the other levels because level 1 data includes samples that failed to pass QC. The level 2 data (GEX, which represents direct measurements) has been split into 2 files ("delta" and "epsilon"), based on which set of genes was measured directly; the total number of columns for these level 2 files is 49,216 + 1,278,882 = 1,328,098. That total (1,328,098) matches the number of columns for the level 3 (INF) and level 4 (ZSPC) data. As described below for GSE70138, the level 5 data (MODZS) is calculated by aggregating across the replicates within the level 4 data, and thus there are fewer columns - about ⅓ as many columns in the level 5 data as in the level 4 data.

rows: 978 landmark genes columns: 955 samples DS_GTEX_RNASEQ_n8555x12320.gctx Compendium of 8,555 RNA-seq samples obtained from the GTEx consortium (version 6). A subset of 3,176 of these samples were also profiled on L1000 and were used to compare the two platforms.

rows: 970 landmark + 11,350 inferred = 12,320 genes columns: 3,176 samples DS_GTEX_RNASEQ_LMONLY_n8555x970.gctx For convenience of use during assay validation and inference testing, we separated out from the overall GTEx RNA-seq dataset (DSGTEx-RNA-seq), the subset of landmark genes and refer to it as DSGTEx-RNA-seq-lmonly in the methods. Note that the GTEx pre-processing provided mappings for 970 of the landmark genes.

LINCS Phase 2 data is in GEO series GSE70138. This series will be updated every 6 months as more L1000 data is produced and QC'ed over the duration of the LINCS program (Starting in 2016 through 2020). The same data will also become available through the LINCS DCIC portal.

For GSE70138, all data levels have the same number of columns (345,976) except for level 5 (MODZS) which has 118050 columns. The difference arises because the level 5 data is calculated by aggregating across individual replicates to generate a single signature for each group of replicates (generally 3 per experiment).

Note: We release data before full analysis and before publication, with the expectation that the data will be useful to others even in its early form. Therefore, some best practices to keep in mind for using released data:

Data releases are appended to the GEO series object, allowing you to view earlier releases in addition to the current one. Each release is a full package (i.e earlier releases are not overwritten), enabling researchers using the data for the first time to get the latest release, while at the same time providing a persistently addressable source for earlier datasets. Thus, please download the data labelled with the most recent date. The figure below shows the most recent files, circled in green, for the GSE70138 dataset. 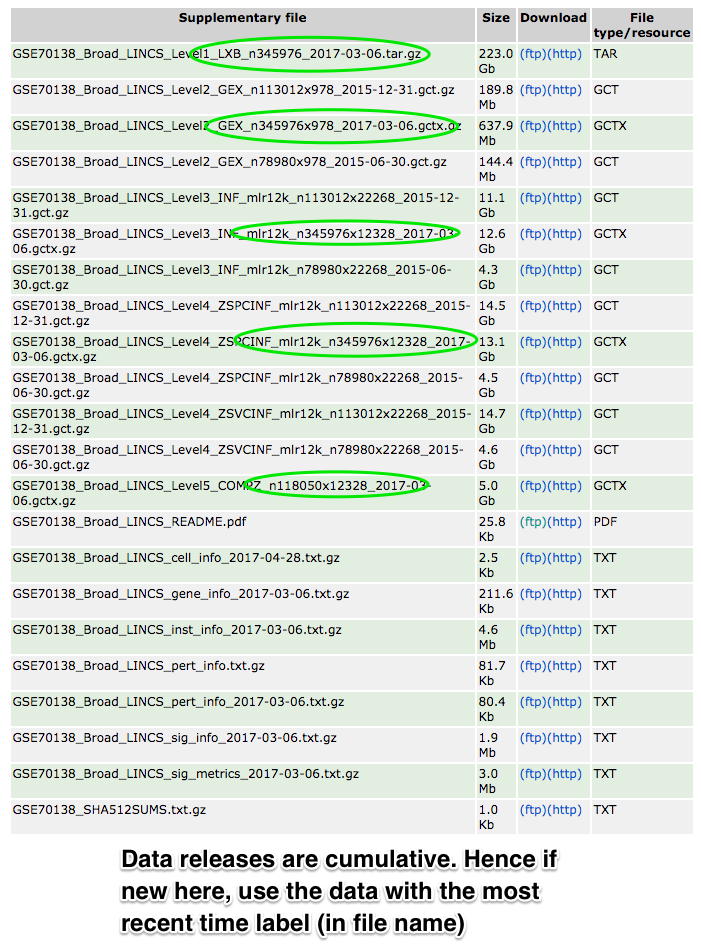 RNAi and CRISPR datasets are in GEO series GSE106127. Note that this data is not new; it is subsetted from the data in GSE92742 and GSE70138 and is the portion of that data corresponding to genetic perturbational signatures from shRNA and CRISPR reagents.

Additionally, CMap / LINCS organizes datasets into discrete bundles to address particular questions in the form of contests, which are archived at GSE92743. The goal of this is to both engage the wider computational community in the improvement of analytics as well as to provide to LINCS users datasets along with benchmarks that are well organized for easier use.

Explanations of the metadata and metrics data column headers can be found in the Glossary.

How were the 1000 landmarks identified?
What are the plate types used for the L1000 assay?
How is the expression of 1,000 genes measured using Luminex beads?
Is the L1000 data "fully QC'd"?
What are the perturbagen types and controls in the CMap dataset?
What compounds are used as positive controls in L1000?
What are metrics used for analyzing the quality of signatures?
What levels/types of data are available?
What are Perturbagen Classes (PCLs)?
What is a consensus gene signature (CGS)?
How do I design a query?
How do I find “valid” gene names for use with the Query App?
Can I use microarray or RNA-Seq data to query CMap?
How do I interpret connectivity scores, and what is a "good" score?
From my top hits, how do I choose compounds to validate and study?
How can I leverage CMap's genetic perturbagens to develop hypotheses?
What are the connectivity map algorithms?
How are replicates collapsed into signatures?

Where can I see a description of the L1000 assay protocol?
What is the protocol for the genetic perturbation experiments?

Is L1000 data available to users from for-profit organizations?
What is the data redistribution policy for LINCS L1000 data?
Is L1000 patented?
Can I publish my study that uses the GEO CMap LINCS data?
What is the source code policy?